He Prevailed Where Others Failed 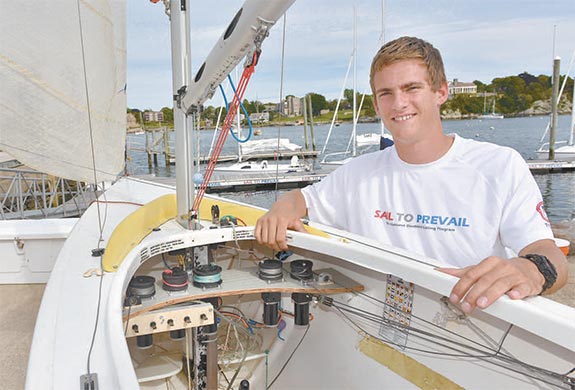 By James A. Johnson – Staff writer

PORTSMOUTH When Tyler Fleig of Portsmouth was trying to choose a senior project last summer, he sought advice from Paul Callahan, his boss at Sail to Prevail in Newport.

Fleig has been an instructor for the past two years with the organization, which creates opportunities for children and adults with disabilities to overcome adversity through therapeutic sailing. For two years before that, he was a volunteer for the organization.

Fleig told Callahan that he wanted to combine his work at Sail to Prevail with his experience in robotics that goes back to his years at Portsmouth
Middle School. As an example of his robotics skills, he was one of six New Englanders who qualified as a FIRST (For Inspiration and Recognition of Science and Technology) Dean’s List World Finalist. His team won the prestigious Chairman’s Award.

Callahan said that Fleig asked him for the most difficult challenge he could think of for his senior project. Callahan suggested adapting a 2.4 meter sailboat for use by quadriplegics.

“People around the world have been trying to crack that for a decade,” Callahan told Fleig. “That will keep you busy over the winter.”

Callahan, a quadriplegic himself who competed in the 2012 Summer Paralympics in London, is the chief executive officer of Sail to Prevail, formerly
known as Shake-A-Leg. Paraplegics are able to sail the 2.4 meter, but not quadriplegics. “The way it is rigged and set up, it would be impossible for a quadriplegic to sail it,” Fleig said Wednesday in an interview at Portsmouth High School, where he graduated with honors on June 5. “They
don’t have the range of motion or strength to sail it in its current setup.”

Using his knowledge of robotics, Fleig set out to create electronic and mechanical systems that would allow quadriplegics to have control over the 2.4 meter boat and sail it at a Paralympics level. That included developing power-assisted sail controls so that the sailor can bring the sails in or out by pushing a button.

Fleig said he logged about 45 hours on the project, including about 20 hours with his mentor. He spent about $1,500 on the project, most of that coming from a major robotics company that requested not to be identified publicly.

Fleig took the 2.4 meter with his controls for a test sail two weeks ago.

“It went really well,” Fleig said of the trial. “There are some minor changes I need to make. Right now, the project is in the prototype phase. It’s not to the point where it would be commercially available.”

“This is quite a breakthrough,” Callahan said of what Fleig accomplished. “He basically revolutionized this one-person boat so that hundreds
and even thousands of challenged people around the country and the world will benefit.”

Although he promises to complete the project, Fleig has little time left before his next endeavor. He must report to the U.S. Naval Academy in
Annapolis, Md., for induction day on July 1. Fleig plans to study computer engineering at Annapolis, a choice inspired by his work with robotics.

Callahan said the project is at least two-thirds complete. The tasks that remain, he said, are not nearly as difficult as those Fleig already mastered.

“He has broken the code, if you will, of what other people have tried to achieve,” Callahan said.

Susan Cerilli, Fleig’s guidance counselor for all four years at Portsmouth High School, gave him a lot of credit for taking on such a daunting senior project.

“I love that Tyler always thinks outside the box,” she said. “He could have done something less difficult. He could have taken on an easier senior project, but he chose to do something that would be impactful and make a difference in people’s lives by doing what he is interested and super talented at.

“That says a lot for his character,” she said.

She described Fleig with such terms as exceptional, mature, humble, extremely motivated and focused. “He is a true gentleman, a kind-hearted, good kid,” she added. She wasn’t the only person with high praise for Fleig, the son of Rick and Carlene Fleig of Portsmouth.

Although Fleig was introduced to robotics in middle school, he became deeply involved in NUWC’s robotics team known as AIR Strike 78 as a high school freshman. AIR stands for Aquidneck Island Robotics.

“I immediately got into the programming and the electrical and computer side of the team and the robot,” he said. “I really enjoyed that. I thought it was so fun to work so hard on something for six weeks and learn all that you can learn and see that product that you made do really well in a competition.”

The AIR Strike team has gone to the FIRST World Championship every year for the past four years and is regarded as a very successful team. Last year, Fleig received an individual award as a FIRST Dean’s List World Finalist. He said he sees a connection between the robotics team and the real world. “In the real world, people who work on a project have a budget they have to follow, they have time constraints, they have to listen to others, they have a limited number of people,” Fleig said. “They are trying to develop a product, the same way we were trying to develop our robot.

“I can see how it connects to the real world,” he said. “I just enjoy it a lot.” Fleig also has established an impressive record in sailing. He was captain of his school sailing team as a sophomore, junior and senior and qualified for the High School National Single Handed Championships in his junior and senior years. He competed in the CORK International Sailing Regatta in Kingston, Ontario, from 2012-14 and was a member of Team USA at the International Youth Regatta in Nieuwpoort, Belgium, in 2011.

He has used those sailingskills to help sailors with disabilitiesat Sail to Prevail.“We take people with all kinds of disabilities — intellectual and physical — and we take them out sailing,” Fleig said. “We teach them how to sail and give them a really good time. A lot of times, it is the only really fun time they might get that week or that day.”

The program reaches people as young as 5 and some in their 60s or 70s, including veterans with disabilities. “It’s a great program,” Fleig said. “I am really grateful for having participated.” His achievements go beyond sailing and robotics. He is a member of the National Honor Society and was named Freshman of the Year and Sophomore of the Year.

He skated with the school’s hockey team in his freshman and sophomore years and later was a member of the cross country team, earning a Coach’s Award. He founded and was the president of the school’s Cyber Patriot Team/Computer Science Club, which finished first in Rhode Island in the National Youth Cyber Defense Competition.

Callahan said he spotted the “genius” in Fleig several years ago and knew that he just needed an outlet.

“The organization is so proud of him because he exemplifies everything that we stand for by using all his skill sets and talents for the benefit of others who are limited in their abilities,” Callahan said. “He is an unusual fellow. We see people who are extraordinary and are equally excited about sharing their gifts. Tyler is an extraordinary example of that.” 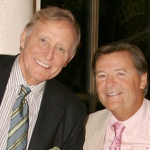 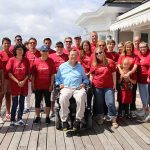