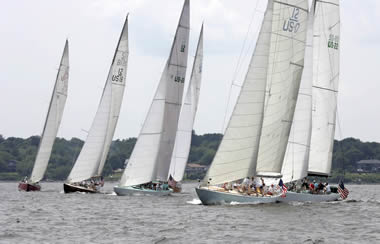 NEWPORT, R.I. (July 10, 2007) This past weekend, teams of corporate executives traded their business suits and briefcases for life jackets and sailing gear to raise funds for Shake-A-Leg-Newport during the Wall Street Corporate Challenge Cup. Hosted at the Newport Shipyard July 6-7, the 16th annual regatta drew executives from the financial and legal world for two unforgettable days of racing aboard the legendary Americas Cup 12 Metre yachts. Proceeds  each of the teams raised $30,000 to participate in the regatta will support Shake-A-Leg?s summer programs for people with spinal cord injuries and nervous system dysfunction. Team MBIA (Armonk, N.Y.) won the six-race series with LATHAM & WATKINS (New York, N.Y.) in second place and BANK OF NY MELLON FINANCIAL CORPORATION (Boston, Mass.) in third.

Winning this is exciting, but it’s not the main reason we participate,? said Michael Ballinger, director of corporate communications and team leader of MBIA. We keep coming back because of the great work Shake-A-Leg does. It is inspiring to be part of this event. Weve known Paul and his team for years and they do such a great job on behalf of all their programs participants.This was the most spectacular racing ever in the 16 year history of the Wall Street Challenge Cup,” said Paul Callahan, Shake-A-Legs chief executive officer.

On Friday night, after the first day of racing, Shake-A-Leg held its annual gala at the Hyatt Regency-Newport for 200 friends and supporters who were treated to a summary video of the days racing narrated by Dave Gendell of T2P.TV. The post-racing social and awards ceremony on Saturday was held at the Newport Shipyard. 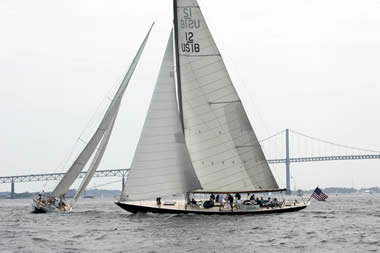 Additional sponsors of the 2007 Wall Street Corporate Challenge include the Hyatt Regency-Newport, Newport Shipyard and Salve Regina University and other local businesses and individuals.

Shake-A-Leg is a non-profit 501(c)(3) organization founded in 1982. Its mission is to assist its participants to become all they can be in education, work place and quality-of-life pursuits. Shake-A-Leg utilizes Salve Regina University and Fort Adams State Park facilities for its adult, young adult and teen rehabilitation services, as well as the Confidence is Cool Camp for youngsters and teens.

Shake-A-Leg’s internationally recognized adaptive sailing program is located at Fort Adams and provides recreational, instructional and competitive sailing opportunities for those who wish to build confidence and learn the skills for an independent life .