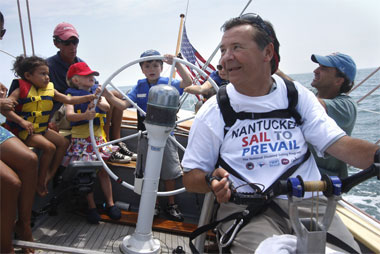 Paul Callahan doesn’t believe in sitting on the sidelines and watching life roll by. The fifty-year-old quadriplegic was at the helm of Easterner this week, the 12-metre sailboat and America’s Cup Yacht his organization Sail to Prevail owns, showing island kids, how in life, many things are possible if you just try.

Tuesday, he and his crew of four took five kids from the S.T.A.R. program along with their parents or caregivers, on a three hour sail out into Nantucket Sound. Kids all donned life vests, clambered on board after watching Callahan and his wheelchair be hoisted from the docks, and headed out through the Jetties.

For the first twenty to thirty minutes some of the kids, aged 4-7, were tentative, even a little fearful.

“I’m a little scared, Nana,” said one little girl to her grandmother as she held onto her arm. Another little girl cried for the first 15 minutes as the boat left the dock.

But as the bow cut through the water, sails were raised and other boats cruised by, the kids began to relax, get comfortable, and enjoy being on the water. The little girl’s tears were dry by the time the Easterner left the last buoy in the harbor behind, and before the day was over, most of the kids had a turn at the wheel, cranking the winch to trim the sails and go below decks to check out the cabin, or “house” as one little girl called it.

The day was a success for the kids and for Callahan, paralyzed at the age of 21 when, in his junior year at Harvard, he slipped on a wet floor, fell, and broke his neck, “For me, it is exceptionally rewarding to help others who are struggling, as I did, and see them find success,” said Callahan, who’s one of the most optimistic and happiest people you’ll probably ever meet.

Married for the past nine years and the father of twin boys, today Callahan lives life to the fullest.

After his accident 30 years ago, Callahan said he spend two years just trying to stabilize his physical condition. When that was achieved, he traveled all over for the next three years seeking the newest therapies to aid spinal cord injury victims in gaining mobility. His condition improved some to where he could sit up and use his upper arms. Finally a doctor told him that further improvement would likely be minimal.

He said to me, “Paul, you can keep doing this and maybe see some more small improvement, but I would suggest to you, go live your life,” Callahan recounted.

Callahan went back to Harvard and graduated, a painful experience in many ways, returning to where he had been an able-bodied individual to struggling to do everything that was so easy before. 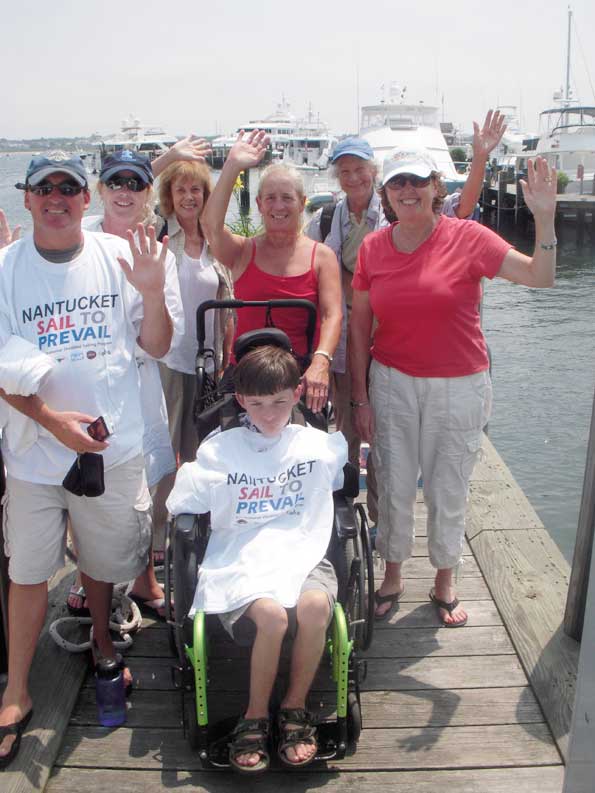 After leaving college he had a career in real estate.

“I learned to drive and since that was something I could do, I drove everywhere and I started looking at all the properties that were for sale and started buying and selling,” he said.

When he tired of that he went to Harvard Business School and eventually ended up at Goldman Sachs, where he was successful there as well. But the corporate life did not energize him the way he wanted and after four years he decided to leave.

He was approached by the non-profit Shake A Leg, whose mission was to provide sailing for disabled people. The organization was in trouble financially. Callahan said he would take on the challenges the organization faced if he could be chairman and CEO. He put his business acumen to work to help the struggling nonprofit and something really clicked for him.

“I felt that this was the think I was supposed to be doing in life” said Callahan.

For the past 12 years now, the Massachusetts native has been introducing kids and adults with disabilities tothe joys of sailing and inspiring people to believe in themselves and their abilities.

“I truly believe that each one of us can do far more than we think we can, and I want to help people see their capabilities,” he said. “You can choose to go forward, or in reverse – it’s your choice.”

Callahan, Easterner and her crew are here until Sunday, with three other trips planned for kids with Autism Speaks, Community Sailing and Great Harbor and a fundraiser hosted by interior designers Lee Bierly and Chris Drake Saturday night at 5:30.