SHAKE-A-LEG Newport – a national leader in therapeutic sailing programs allowing children, adolescents and adults of varying abilities to dramatically improve their lives – announced today the donation of the 12-Metre Easterner (US 18) to the world famous disabled sailing program. Donated by Arthur Shlossman (Jamestown, R.I.), the classic yacht best known for its America’s Cup history, will be adapted by SHAKE-A-LEG to allow people with disabilities to compete alongside able-bodied sailors. The yacht’s steering and sail trim features will be reengineered to allow disabled people to compete in an arena that no one could ever have dreamed during the era when the magnificent America’s Cup boats were originally commissioned.

“It’s a breakthrough of monstrous proportions, not only for disabled people, but for the whole sailing world,” said Paul Callahan, SHAKE-A-LEG CEO and a member of the 2000 U.S. Paralympic Team who has served as guest tactician aboard the 12-Metre Valiant since 1998.

Once Easterner has been modified, Callahan will lead a team of both disabled and able-bodied crew members aboard her to the starting line of The 12-Metre World Championship, hosted by the New Yacht Club in Newport, R.I., next September. More than forty 12-Metres from around the globe are expected to compete on the same waters that once hosted the America’s Cup.

Callahan also stated that the 66-foot Easterner will become an integral part of SHAKE-A-LEG’s daily Adaptive Sailing program that teaches people with disabilities the fundamentals of teamwork, self confidence, mentorship and an added feature, “the ability to perform optimally under pressure, with disabled and able-bodied people working side by side.” Callahan went on to say that this will not only show that disabled sailors are competent in their own right, but can work alongside with, and even successfully compete with, able-bodied professional sailors.”

Created in 1982 to make sailing accessible to individuals with physical, as well as intellectual disabilities, SHAKE-A-LEG Newport’s Adaptive Sailing Program broke ground as the first program of its kind in the USA. Adaptive Sailing has earned world-wide recognition and become a model program for other waterfront communities. Operating from its fully accessible facility in Fort Adams State Park, Adaptive Sailing is open to all ages, and offers lessons and recreational sailing in two-hour sessions supervised by US SAILING certified instructors, as well as competitive sailing opportunities. 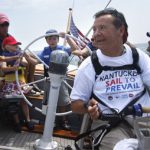